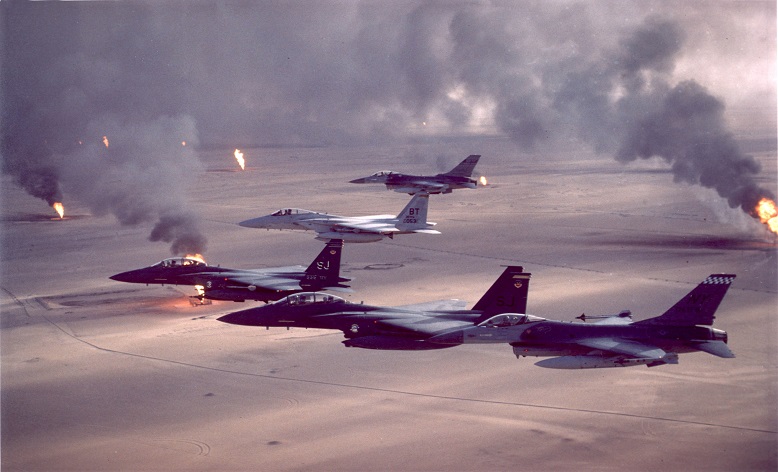 On Jan. 24, 1991, a U.S.-led international coalition won the first battle of Operation Desert Storm, the effort to free Kuwait after its invasion and annexation by Iraq, with the coordinated efforts of the Army and Navy.

On Jan. 24, 1991, a U.S.-led international coalition won the first battle of Operation Desert Storm, the effort to free Kuwait after its invasion and annexation by Iraq, with the coordinated efforts of the Army and Navy.

The Oliver Hazard Perry-class frigate USS Curts had been in the area since the previous October as part of the Midway battle group out of its homeport in Yokosuka, Japan. The Perry-class frigates, while lightly armed, were small, fast and maneuverable -- an asset in the shallow waters of the North Arabian Gulf, which was full of floating mines. The Curts had a shipboard complement of around 200 sailors. If the battle got hot, they were seen as more expendable, easier to lose than the much larger crew of a carrier, a destroyer or even one of the battleships called into duty for the conflict.

Curts had been the ship farthest north in the Persian Gulf since before the shooting began on Jan. 17, 1991, marking the start of Desert Storm. Its main mission was to be the first line of defense against any air attack emanating from the Iraqi mainland. It was also to rescue any allied pilots forced to ditch their aircraft into the water due to battle damage suffered during the hundreds of daily bombing runs that were being launched into Iraq.

Embarked aboard Curts was an SH-60B Light Airborne Multipurpose (LAMPS) Seahawk helicopter, originally designed to hunt submarines but fitted out with a machine gun and other armament for the current mission. There were also two Army Bell OH-50D Kiowa Warrior helos from Troop B, 4th Squadron, 17th Cavalry, which were more heavily armed.

On the morning of Jan. 24, 1991, the Curts was operating in an area about 25 miles off the Kuwait coast near several oil fields, searching for enemy minelayers. A Kuwaiti major who was aboard the ship to provide intel told the ship's captain, CDR Glenn Montgomery, about a nearby radar buoy that had been used by the Iraqis during the Iran-Iraq War in the 1980s to spot planes and ships. Montgomery decided to send the SH-60B and a few Navy SEALs to take a look.

The SH-60B crew flew out to the buoy but didn't see anyone; however, they did notice what appeared to be a couple of small minelayer boats pierside on nearby Qaruh Island, a small spit of Kuwaiti sand the size of three football fields and surrounded by oil wells. The crew called back to the ship to ask the Army Warriors for support.

While the naval helicopter was standing off and observing the small boats, a couple of aircraft from the carrier Midway came in fast and low on an unannounced strafing run, surprising everyone on both sides and causing one of the minelayers to take off, run into its own mine and sink.

By this time, the Army Warrior helicopters had arrived on scene and began taking small-arms fire from the enemy garrison on the island, but the shots fell far short. One of the Warriors fired a few short bursts from its onboard weapons onto the beach; white surrender flags immediately came up on the island.

Warrior 1 landed, and CW3 Dudley Carver, armed with his .45, accepted the surrender while Warrior 2 and the Navy Seahawk remained airborne and provided cover.

Hearing all the radio chatter from the flagship, USS Leftwich, down south, Montgomery's boss, Commodore Bill Putnam, came up on communications, asking, "What the heck are you guys doing up there?"

Montgomery replied, "Commodore, we have an island."

The Curts launched their motor whaleboat to bring the prisoners aboard. As the first boatload came alongside, the shipboard Combat Information Center reported Iraqi Mirage F-1 attack aircraft inbound fast -- the only time during the war they left Iraq and came over water.

Taking evasive maneuvers, the Curts powered up to flank speed and turned to lessen its radar signature, and an SM-1 Sea to Air missile was brought up on the launching rail.

Immediately, the ship's lookout yelled, "Mine, mine -- dead ahead!"

The ship turned hard at flank speed, heeling over to 25 degrees. The Executive Officer shouted from the bridge wing that the ship had responded so quickly that the stern was swinging towards the mine. The helmsman shifted the rudder, sending the ship into another strong list but managing to avoid the deadly floating mine by less than 10 feet.

Just another day in the life of a tincan sailor!

Royal Saudi Air Force fighters quickly appeared and shot down two of the Mirages, causing the others to flee back into Iraq.

Eventually, other U.S. and allied ships arrived in the area for support. The Curts returned and retrieved all the prisoners, and a crew member provided a souvenir Kuwaiti flag purchased in Bahrain for the SEALs to transport to the island. They raised it, along with the American flag, on Qaruh Island, signaling victory.

By the end of the day, two minelayers and several floating mines had been destroyed. Fifty-one Iraqi prisoners, Qaruh Island, minefield charts, and crypto and intel resources were all in the allies' hands, and the liberation of Kuwait had begun -- thanks to the small crew of one of the smallest ships in the fleet and two of the smallest helicopters in the Army.