The Case for Limiting Kids’ Screen Time: A Review of Be the Parent 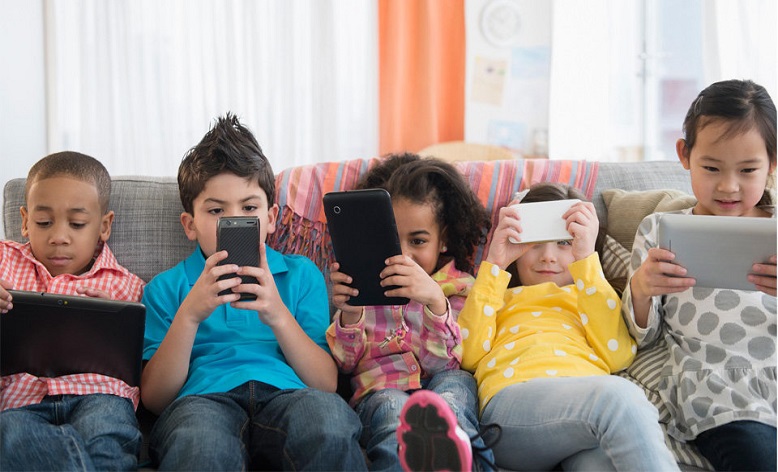 It’s hard to think of a more controversial topic among contemporary parents—whatever the age of their kids—than screen time.

The time kids spend gazing at TVs, computers, tablets, and phones arguably contribute to half of Americans’ top ten health concerns for children: bullying/cyberbullying, not enough exercise, Internet safety, suicide, and depression. Yet parents who go looking for guidance on the subject may end up more confused than enlightened. Is screen time detrimental? Educational? Neutral? Should parents limit their kids’ tech use, or will that only backfire?

Naomi Schaefer Riley offers clear answers to these questions in her new book, Be the Parent, Please: Stop Banning Seesaws and Start Banning Snapchat. The tone of the book is more moderate than its blunt title, and all parents and aspiring parents could benefit from reading it. Riley draws on scholarly research, surveys, interviews with experts and parents, and her own experience and observation to investigate how tech use is shaping childhood and adolescence today. And she doesn’t hesitate to offer clear advice based on her conclusions.

Before continuing, perhaps I should establish that I’m no Luddite. My husband and I collectively own three laptops, an iPhone, an Android, a TV, a Kindle, a Google Home, and at least five email accounts. Thanks to the Internet, I’ve been able to work from home for almost five years now, and I use Facebook, Twitter, and Instagram on a daily basis. My three-year-old’s first imaginary friends were Fig and Maple—characters from Amazon’s TV series Tumble Leaf.

Despite my personal reliance on technology, Riley strengthened my resolve to sharply limit the amount of time my kids spend on screens, from toddlerhood through their teenage years. However, she does not lack sympathy for families who make other choices. As she tells it, “Parenting can seem like one long exercise in frustration.” She understands the isolation, tedium, and attention fragmentation that parents of small kids feel, especially parents who work from home. In light of the increasing amount of hours mothers and fathers devote to caring for kids, and the pressure to stimulate their intellectual development at every opportunity, it’s no wonder many parents often turn to technology for a break. And as kids get older, their habits and peer groups keep them tethered to screens. But at what cost?

That’s a matter of some dispute—but that there are costs seems undeniable. Young Americans spend a significant fraction of their waking hours on screens: on average, 2.5 hours a day for preschool-age kids, 4.5 hours for tweens, and almost seven hours for teens, according to surveys by Common Sense Media. Although there obviously aren’t any randomized, controlled studies on children’s exposure to media and technology, TV has been around long enough for a sizable body of research to emerge. Researcher Tim J. Smith told Riley that watching television “seems to have an independent contribution to various negative outcomes for children, including language delay, poor physical health and possible delinquency, and later criminal behavior.” Kids can learn from educational television programs; however, some studies suggest that kids only benefit if their parents watch and talk about the shows with them—which, for many parents, defeats the point of turning on a show in the first place. A similar principle applies to electronic toys: if they’re replacing rather than facilitating interactions with parents, they’re probably not teaching your toddler anything.

That said, it is Riley’s description of the use of technology by schools and among teens that parents may find most concerning. Many schools give every student a tablet or laptop and encourage teachers to make use of them in the classroom, and plenty of students smuggle their phones into class, regardless of the school rules on the matter. But if we adults find ourselves tempted by social media and games when we should be working, how can we expect kids to restrain themselves when they’re supposed to be studying or listening to a lecture? One large study in England discovered that low-achieving students performed better on standardized tests after their schools banned cell phones. Research at the college level reveals that even taking notes on a laptop, rather than by hand, actually hurts students’ learning. Despite such findings, libraries and schools—the two institutions that one might expect to emphasize books and traditional learning methods over technology—continue to spend a fortune on computers, tablets, and other supposedly educational devices.

The screen issue that causes the most parental worry and parent-child conflict is teenagers’ use of smartphones and other Internet-connected devices. Needless to say, the time they spend on them necessarily leaves less time for activities such as studying in a focused manner, exercising, reading books, and talking with family and friends in real life. Yet what they do online is just as important, for, to use Riley’s terms, it is simultaneously private (hidden from their parents), public (visible to hundreds of their acquaintances, if not the general public), and permanent. The poor choices that teens have always been prone to making are now more apt to have permanent and devastating consequences.

Further, the unpleasant dynamics of middle and high schools are no longer confined within school walls. When a smartphone enters the picture, home no longer offers a haven from bullying, leering, or just plain annoying classmates. Even the high schoolers who resist the norm of sending and requesting nude photos may face a greater risk of loneliness, depression, and even suicide, as Jean Twenge has famously warned.

I hope subsequent research will prove some of these fears overblown, and it is easy to overemphasize even well-established findings. Watching a little TV on a daily basis probably won’t cause a speech delay in a toddler, and the majority of American teens are doing fine. Yet Riley still makes a strong case for applying strict, black-and-white limits to media usage, and for putting off the purchase of a smartphone for a child until at least high school. The problem is this: screens ensure kids will always be entertained and thus undermine their ability to entertain themselves. They will experience boredom so rarely that they will not know how to deal with it, and their shortened attention span will make it harder for them to empathize (or even converse) with others, to come up with original ideas, and to persevere in the face of challenges. If 24/7 Internet connectivity has undermined our ability as adults to concentrate, why would it not have a similar effect on kids? Shouldn’t they have the chance to develop their intellects, skills, and relationships without the distraction of screens?

If parents become persuaded that they should reduce their children’s exposure to technology, Riley underlines, they will first need to change their own mindset. In her words, “Only once we set reasonable standards for our children’s gratification will we be able to set reasonable goals for how to parent with technology.” When we decide “a child must be completely satisfied and engaged by an adult from morning until the night, we have made our jobs as parents impossible.” To limit screen time without losing their minds, she advises, parents should try a little benign neglect. The muddy clothes and toy-covered floors that result may be annoying, but children who can amuse themselves will be easier to raise in the long run.

*Anna Sutherland is a writer and editor living in Michigan.